Feyenoord’s secret for the best pitch 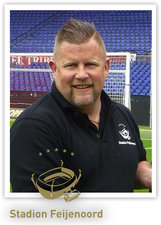 February 2015 - Erwin Beltman may well be the most famous groundsman of the Netherlands. He attracted a lot of attention during the Royal Dutch Football Association’s cup final in 2014. When the beautiful pitch was ruined by fireworks thrown onto it by supporters, Beltman and his team succeeded in repairing it so well that the match could be finished.

At the end of the 2013/2014 football season the pitch of the Feyenoord football club was proclaimed the very best premier league pitch. A feather in the cap for Beltman and his team. Nevertheless, in July it was decided to create a new sward. The many matches played on it had damaged it to such an extent that it no longer met Feyenoord’s high quality requirements. 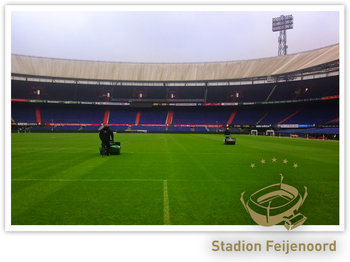 The new sward was created using Barenbrug’s grass seed, more specifically Barenbrug’s RPR. RPR ensures a very dense sward. The horizontal stolons create a close-knit network of grass plants that’s virtually impossible to destroy. Thanks to the wonderful weather, Beltman was able to overseed the sward with RPR into November.

From November onwards SOS had to prove its worth. SOS is extremely suitable for use at low temperatures. That’s because SOS will germinate even at very low temperatures. Frequent overseeding with this rapidly germinating grass seed will ensure a permanently smooth sward. The aim should be to prevent bare patches, because, according to Beltman, repair efforts will be too late once bare patches have formed. Weeds such as annual meadow grass germinate very quickly and may soon ruin a sward. Beltman intends to use SOS for overseeding throughout the entire winter if possible. The team hopes to once again receive the award for the best pitch at the end of the season.

According to Beltman, the secret of a good sward is total management. For a start, the germination of grass seed can be predicted on the basis of Growing Degree Days. All you have to do is closely monitor the temperatures. Total management also includes overseeding. SOS is the ideal mixture for overseeding in winter. If it is done regularly, there will always be germinating seed in the soil.

Thanks to the successful efforts of Beltman and his team, Feyenoord may once again very well have the best premier league pitch. That would at least be the conclusion that can be drawn from the half-time score of the pitch competition of the Dutch professional footballers’ association. RPR quickly created a sward as strong as iron, and SOS ensures that it retains its strength and smoothness.

Is your sward in need of repair too? Whether it’s for the goal area in a stadium, the local amateur club’s penalty area or your neighbourhood football pitch, go for SOS now!