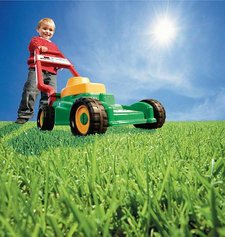 Sustainable grass management also means less mowing. During the growth season, grass can produce a considerable mass of material as a result of high temperatures and plenty of light. This means that the grass will then also need to be mowed more frequently, involving more work, equipment costs and fuel (fossil energy) and at the same time resulting in increased CO2 emissions.

Barenbrug has invested heavily in research into the biomass production of grass. Research has shown that not only are there differences between species, but that within species too, in other words at cultivar level, there are significant differences in growth height and grass production.

Lolium perenne - The differences between Lolium perennes are significant. In general, the older sports fields types, such as Barrage, produce much more biomass than the newer types, particularly those with fine leaves. The differences can be as much as 30% and more. Figure 6 gives an indication of the amounts of biomass produced per m2 per year for two cultivars of Lolium perenne. Dark Barblack, with its somewhat fine leaves, produces more than 20% less biomass than the broad-leaved sports field variety, Barrage.

Smooth stalked meadow grass (Poa pratensis) - Although the differences in grass yield for Poa pratensis are smaller than for Lolium perenne, growth heights for meadow grass can vary greatly. In this case, too, fine-leaved types grow more slowly than broader-leaved types. Figure 7 gives an indication of the biomass production of two meadow grass cultivars per m2 per year.

Festuca arundinacea - Over the last few decades there were frequent long periods of drought. Combined with the use of poor, sandy topsoils this has led to sports fields being significantly sensitive to  drought. Selecting Festuca arundinacea in such cases seems to be the right solution for obtaining optimum performance in many such cases. This can mainly be explained by the ability of Festuca arundinacea to form a deep-lying root system. There are also large differences in terms of grass yield, as shown in figure 8.

The provisional results of research show huge differences in growth and yield for Festuca arundinacea. Great savings can be made by choosing the right mixture!

Over the course of 2013, Barenbrug will be able to provide you with a good deal of additional information relating to the biomass production of other cultivars, such as Lolium perenne, Poa pratensis and Festuca arundinacea. These cultivars will be used for the GreenEarth products for sports fields, fairways, tees and other public green spaces. We will keep you informed!

Crested hairgrass - Barenbrug's famous crested hairgrass, Barkoel, guarantees 'less mowing'. Research by STRI in the nineties demonstrated that Barkoel reduces mowing frequency by 35% while the excellent quality of ornamental lawns stays the same. The variety Barkoel also performs perfectly during times of drought and in winter.

The economically and ecologically sound use and management of grass occupies a prominent position in Barenbrug's product development. Through the introduction of the GreenEarth quality label, Barenbrug is helping green space managers to achieve a more sustainable use and...