19-12-2014 - As a member of Breeders Trust, Barenbrug supports research intended to ensure compliance with and enforcement of plant breeders’ rights and to ban illegal production of and trade in breeding material. With that research Breeders Trust helps to secure continuity in the development of new varieties and a healthy sector characterised by fair production and trade. The recently discovered fraud involving forged Polish certificates shows just how important Breeders Trust’s work is for ensuring a healthy sector. Read more about this matter in the following press release. 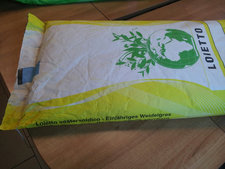 Brussels - 3 December 2014. The Portuguese inspection service ASAE has, after a thorough investigation by the Belgium-based Breeders Trust, impounded 21,000 kilograms of grass seed with forged Polish certificates. The fraud concerns at least 3 varieties of Westerwolds ryegrass which are marketed in various countries including Portugal and France. In response to the findings of Breeders Trust, the Polish Inspection service Piorin warned inspection agencies throughout Europe to be vigilant and, if necessary, block Polish parties of grass seed until there is certainty about the authenticity of the certificates.

This autumn, after receiving a tip, Breeders Trust collected samples of the grass varieties Asterix, Jolly and Millenium in various European countries and ascertained that the Polish certificates were not genuine. Project manager Corné van Beers: “It is only possible to detect the forged certificates if you know which designations on the certificate have been changed”. At first glance, the forged Polish certificates appear normal. But as ever: “the perfect counterfeit does not exist”. The Polish inspection agency was extremely surprised and immediately took action, particularly since Breeders Trust had recently encountered forged Polish certificates in France. Additional study must reveal whether parties with forged Polish labels have also been brought into circulation in other European countries, said Van Beers.

The grass seed world has reacted in shock to the discovery of the fraud with Polish certificates which has spread throughout Europe and has possibly been disrupting the market for some time.

Breeders Trust director Geert Staring confirmed in a reaction that they will continue with the investigation and, in close collaboration with the national inspection services and investigation authorities, will do everything possible to determine the scale of the fraud and to discover the origins of the grass seed with forged certificates.

Copying of and illegal trading in protected products are becoming ever more of a problem all over the world, also in grass-seed chains. The organisation Breeders Trust supports seed-potato and grass-seed breeders with efforts to ensure compliance with and enforcement of plant breeders’ rights and to ban illegal production of and trade in breeding material. The trust also initiates legal proceedings against growers and other chain parties who deliberately break the law. With these efforts Breeders Trust helps to secure continuity in the development of new varieties and a healthy sector characterised by fair production and trade. For more information go to www.breederstrust.eu.