France will be going crazy this summer as the biggest European football stars go head-to-head, showing off their skills and fighting out the toughest battles. For that to be able to happen you need to start with the basics: the field. Barenbrug is able to supply all football stadiums with the best turf. The main ingredient for this is RPR grass seed. Super-tough RPR has become very popular in France in recent years. 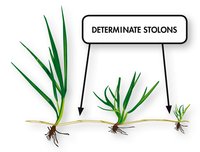 RPR is a perennial regenerating ryegrass that forms deteminated stolons. It is the first and only perennial ryegrass to possess this unique characteristic. Competitors claimed that it couldn't be done, but Barenbrug achieved it. The big advantage of ordinary perennial ryegrass is how quickly it establishes itself. RPR has the addition of incredible strength, while maintaining the same speed. The determinated stolons create an enormous network of plants that is almost indestructible. When damage is caused by, for example, a hard tackle, RPR's regenerating ability comes into play. The turf is repaired again in no time.

Revolutionary RPR is not just the best solution when sowing new fields; it also proves its worth when repairing existing fields. Regular overseeding ensures that a damaged field regains its beauty and strength. All in all, RPR is the best product for the major European competitions this summer. 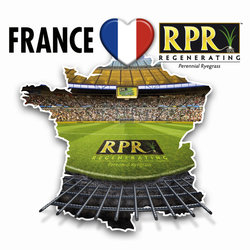 Barenbrug has been demonstrating its knowledge and expertise in the sports world for years now, and has the references to prove it. Take, for example, the Olympic stadium pitch during the Games in Beijing. Or the playing fields during the World Cup in South Africa, where Barenbrug grass seed was applied to save the fields at the last minute – and successfully. The UEFA playing fields in Poland and Ukraine were also oversown with Barenbrug grass seed. Former national coach Bert van Marwijk expressed his great appreciation of it. The revolutionary RPR was also the basis of the fantastic fields at the Confederations Cup in Brazil, the prelude of the FIFA World Cup. At the 2014 World Cup the best field was the Dutch team's training field; RPR proved its enormous value.

Breeding varieties until they are perfect for the end user is an important goal. In order to reach this goal, there are two Research & Development locations in France, for example. Barenbrug has R&D locations in the north (Connantre in the Marne department) and south (Mas-Grenier in the Tarn-et-Garonne department) of France, because this allows varieties and strains to be tested in different climates. All those hectares of test fields for developing that one perfect plant for the right application; a fabulous effort every time. The seed production of grass seeds for use in France is also mainly carried out in France, under the authority of Barenbrug France. For the best turf of the EURO 2016, Barenbrug's philosophy 'Think global, act local' is an important guarantee when choosing RPR, a revolutionary concept for self-healing super-tough grass.

Many years of experience and breeding have ensured that Barenbrug's grasses are an essential part of major international events. The best performances require the best fields. This summer, the whole world will be watching the most important European matches in France. Barenbrug is proud to guarantee top-quality fields.