As R&D continues to deliver new innovative products, many varieties have gained positions on recommended lists all over Europe in recent years. In the meantime, seed production has begun and several new varieties will be commercially available for the upcoming sowing season. These will be used to further improve the Barenbrug-branded mixtures all over Europe. 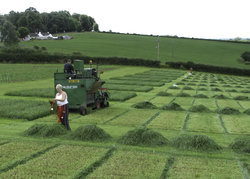 Originally from the NutriFibre-programme. It’s the highest yielding in its class, with improved palatability.

A ‘must-have’ on every modern farm.

Widely adapted to Western and Central Europe. The No.1 variety in Germany for yield and disease resistance. It will dominate the European grasslands.

A variety with an excellent all-round performance, both in continental and oceanic climates. It has proven outstanding persistency under harsh conditions.

Originally from our breeding programme in Eastern Europe. This modern continental variety will be a successful addition to the Green Spirit mixtures.

The variety that outclassed all the standards in yield and performance during official German trials. Its excellent disease resistance and forage quality will ensure “production + palatability”.

Listed in Germany, Switzerland and Romania. This variety shows its great adaptation to hot and dry summers as well as to long, cold winters.

A very persistent variety. It has been shown to form perfect ground cover and maintain its role in pasture productivity, year after year.

Especially suitable for intensive cutting fields in Central and Eastern Europe. It has shown excellent yield and feed quality in trials in Romania, Poland and Russia.