NutriFibre, technology for the best forage from your own land

Barenbrug offers you this possibility with its NutriFibre: the required  effective fibre and feed value combined in a single product, enabling you to harvest large quantities of forage with sufficient energy for highly productive dairy cattle. The forage is rich in protein, resulting in a high concentration of protein in the milk. Barenbrug uses the benefits of its Nutrifibre technology in its grass mixtures.

It sounds almost too good to be true, and yet it is indeed true. NutriFibre is Barenbrug’s new technology for ensuring superior silage for dairy cattle, capable of replacing traditional sources of fibre such as lucerne, straw or grass hay. The outcome of the advantageous combination of effective fibre and feed value is milk - lots of milk. The upcoming abolition of the milk quotas will make it even more interesting for dairy farmers to use NutriFibre. Being able to produce more, better forage on your own land will help you to lower your costs per kilogram of milk. 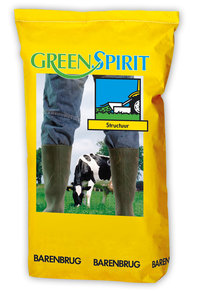 NutriFibre is a kind of Intel inside, the well-known microprocessor that enhances the performance of many computers. For a start, NutriFibre ensures forage with the right combination of feed value and  effective fibre. The secret behind NutriFibre is soft-leaf tall fescue. That may sound a bit strange, because tall fescue is traditionally known as a species that does contain fibre, but has a low feed value.  Barenbrug’s breeders have however developed a soft-leaved variant of this species, combining the traditional  fibrous properties of tall fescue with high yields in terms of both tonnes of forage and feed value. On top of this, soft-leaf tall fescue is also very palatable, making for good feed intake. The optimum amount of NutriFibre silage containing soft-leaf tall fescue will depend on a dairy farm’s feed programme. The more maize silage and concentrated feed the cattle are fed, the greater the amount of NutriFibre silage that can be added. 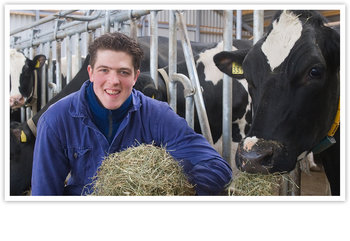 NutriFibre has proven to be very successful in practice. Its effect has also been extensively tested in trials involving rumen-fistulated cattle, which Barenbrug carried out in cooperation with the Nutreco Ruminant Research Centre. The animals’ rumen activity following a standard feed ration was compared with that following a ration containing NutriFibre.

A major advantage of the new technology is that it greatly reduces the occurrence of rumen acidosis, partly because the soft-leaf tall fescue stimulates the cattle to ruminate more and produce greater amounts of saliva. It has been found that a ration of feed containing soft-leaf tall fescue (NutriFibre) lowers feed costs per cow by 0.29 eurocents a day. This amounts to more than 10,000 euros a year at a farm with a herd of a hundred dairy cows.

The diesel among grass mixes 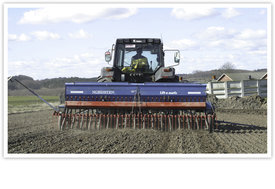 NutriFibre enables you to harvest the greatest amounts of forage of the very best quality from your own land. During the production of the first two cuts the grass will form an impressive root system. The diesel effect of NutriFibre will become really apparent from the second season onwards, by which time the feed value yield per hectare will be a lot higher than that of perennial ryegrass. The roots of the NutriFibre soft-leaf tall fescue reach much greater depths than those of other grass species, making this species less susceptible to drought and enabling it to utilise the nutrients contained in the soil  more effectively.

Find out more about how NutriFibre was developed and how it works in practice, by watching this video.